Today is the start of a new regular feature, we’ll be profiling some accomplished hobbyists that are pushing the boundaries with character driven models, unique techniques or otherwise particularly striking models. This is our first instalment, I asked PDH, a dakkadakka resident and modeller (who I’m not ashamed to mention has inspired some of my I28 models) if he wouldn’t mind sharing some info about his hobby with us.

What got you started with the hobby?

My Grandmother and my Mum. My Grandmother bought herself HeroQuest because it was voted one of the best games in the year it was released. Well lets just say the reviewer and my Grandmother had different ideas as to what made a good board game. So it was passed onto me. At this point I thought it was just a cool MB board game. Then in 1991 I was in town with my Mum at the end of the school holidays, getting my school uniform.

We walked past Games Workshop and the Skeleton Army boxset was in the window display next to a Minotaur Lord painted blue. I had recently watched Jason and the Argonauts and so Skeletons armed with swords were soooooo cool. In I went and from that point I was hooked.

My favourite model changes all the time; at the moment it’s my Skavvy Boss. But if I were to be pushed for an all time favourite it would be the Eccliesiarchy Priest Sonerhud I built for Inquistor Benadice’s retinue. It is the most ambitious green stuffing I have done and it came out just how I envisioned him. He was inspired by John Blanche’s Priest Windows in the Emperor’s Will art book, I now have the original illustration looking down on my hobby desk with inspires me each time I look at it. 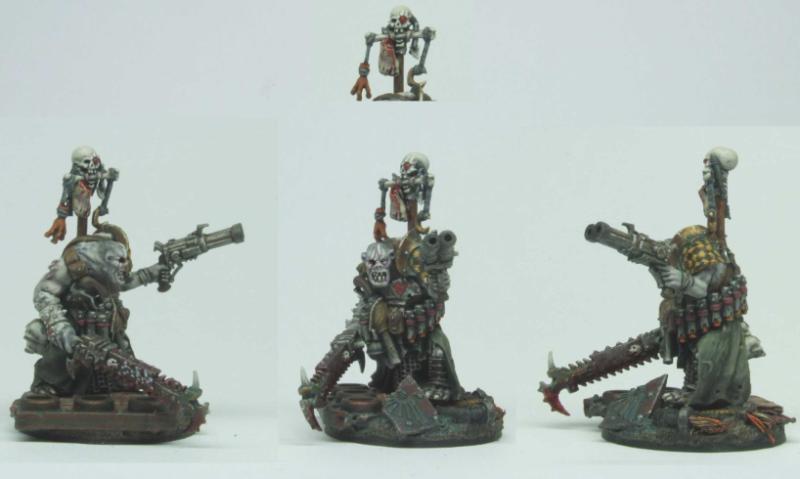 Where do you get your inspiration from?

Inspiration comes from all over the place. I regularly visit art galleries and everyday architecture can lead to models and scenarios. John Blanche has really inspired me with his illustrations because they are the epitome of 40k – head wires and back gubbins. I get inspiration and motivation from my hobby friends and their blogs. Bouncing ideas back and forth with them and of course trying to up my game so my models can stand up next to theirs. Another thing that really inspires me is the settings where my figures are based; Commissar Molotov created the Dalthus Sector (and others have since added to it) and The space hulk The Yggdrassillium from the minds of Neil101, John and Fulgrim.

What’s your focus for the hobby? Gaming, Modeling, Painting, all the above?

If asked a few years ago I would have said modelling/painting, with an aim to play a game with the models. While my focus is still modelling/painting I know I will get to play games with the models and this really brings these plastic figures to life and motivates me to make even more. Finding Migsula’s Jade Vessel thread on DakkaDakka and then joining the forum changed my hobby for the better, I was no longer just painting models for my model case. Then Inquisitor Molotov’s Inqvitational really changed the way I do my hobby as I now game, write short fiction/background and I’ve made some really good friends in the process who appreciate the hobby in a similar way to me.

You obviously focus a lot on the more specialist/gang related games, do you play any of the bigger games – 40k etc?

I used to play 40k. The last time I had a painted army was back in 2nd Children. The army consisted of 2 Characters, 2 six man squads, a dreadnought and a Land Speeder. I also got into Necro in 1995 and loved the more detailed rules. Then 3rd made my army illegal but that was fine as I had started college and other things became more important. So between 1998 and 2006 I did very little modelling/painting but I was still interested in Warhammer.

After Uni I got back into GW and painted a Cawdor gang and some Inquisition types and I bought an Eldar Army and Death Guard which I played with unpainted (Oh the shame) as I could never paint more than a couple as I got bored. So I concentrated on small specialist game projects because they keep my interest and I can have a finished force in six models or so.

I am currently thinking about a Eccliesiarchy Army using Grey Knight/Inquisition rules. No sisters just the weird and wonderful at the back of the drawings. Could also be useful for NPC’s in games of Inquisitor…two birds one stone.

Do you have any hobby secrets or tips to share?

I have four hobby secrets:

1. Drill out your gun barrels.
2. Clay Shapers for green stuffing are the best thing since sliced bread.
3. Don’t be afraid to ask people how they painted/modelled theirs.
4. A hobby to-do-list. A new one for 2014 that is working out brilliantly.

Thanks to PDH for taking part, you can check out his stuff on dakkadakka here, be sure to say we sent you 😉